Legendary Trace Rifles May Be On Their Way

It’s been a few weeks since the Destiny 2 Showcase, and we know a lot more about The Witch Queen expansion and Year 5 of Destiny 2 than we did before. We’ve gotten new information on weapon crafting and glaives, raids, Hive Guardians, and the subclass reworks. But there’s even more that’s been revealed

Polygon spoke to Joe Blackburn and Justin Truman about if unique, Exotic-only weapons will stay Exotic forever, the limitations of Exotic Catalysts, and the return of Gjallarhorn.

Destiny 2 has gotten a variety of unique Exotics over the past four years. But several of those fall into the same unique weapon type: trace rifles. Trace rifles are like auto rifles, but fire in a single, continuous beam and use the rarer Special ammo.

Players started out with Coldheart at Destiny 2’s launch and have since picked up Prometheus Lens, Wavesplitter, Divinity, Ruinous Effigy, and soon, Ager’s Scepter. Despite having six weapons that all work similarly, there are no Legendary trace rifles in Destiny 2. But that could be changing. 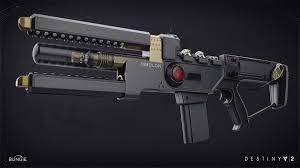 “You can look back at our track record here,” said Blackburn. “And you can say things like ‘Hey, I remember when swords were just Exotic,’ right? ‘Hey, I remember when there was only one sidearm in the game.’ This is something that as we explore, we’re really excited about pushing some of those.”

Blackburn went on to mention that some Exotic-only weapons need to stay Exotic to stay unique. The Legend of Acrius and Tractor Cannon shotguns, which sit alongside one another as the only shotguns that use Heavy ammo, are unique. Being in the Heavy slot makes those weapons Exotic. But not every “unique” Exotic falls into that category.

“Dead Man’s Tale is pretty cool, right,” said Blackburn. “Coldheart is pretty cool. These are all stuff that we look at in the future and say, yeah, we’re as excited as the community is about a bunch of that.”

Truman expanded on this idea: “The question we ask ourselves a lot is, like, ‘Do we want this to be this really unique, personalized experience? Or do we want this to be a space that we can play in?’ So if we were to expand one of those [weapon types] we wouldn’t release one Legendary, we’d be like ‘Oh, this is an awesome space for us to release a whole slew.’ But I think some of them, that’s definitely like, no, it’s really cool to have this one, interesting exception to the rule.”

For Bungie, it seems to be a question of “What makes this weapon Exotic?” If it’s the slot or special archetype itself, maybe that type will always be limited to Exotics. But it seems that trace rifles – and even potentially lever-action scout rifles like Dead Man’s Tale – might get Legendary versions sooner rather than later.

What do you think of these revelations? Let us know in the comments.

Trials of Osiris’ Changes Are Phenomenally Good
Savathun’s Story, Part 3: The Rise Of Rivals And Curses