With the Witch Queen on the horizon, I thought it best to refresh Guardians’ memory a little. Today, and over the course of several other articles, we’ll be going over everything we know about Savathun, from her origins as Sathona of Fundament to the Witch Queen we know today. We’ve already released Part 1: Pact Of The Deep, and today we’ll be continuing with Part 2: Schemes And Songs In Sol.

Around the same time that the Hive’s tribute system was established, Savathûn, unsatisfied with the established method of Worm-feeding, embarked on a project that would allow her to escape the trap feeding the Worms created.

To do so, she attempted to increase the rate at which her subordinate Hive gathered tribute for her, by placing several Ascendant Hive in orbit around a black hole. In doing this, she hoped that because time would pass more slowly for the Ascendants relative to the outside universe, the Ascendant’s Worm would perceive an increased rate of tribute produced by lesser Hive elsewhere in the cosmos, and thus be satisfied without a true increase in tribute.

However, this plan was unsuccessful, as the Ascendants’ Worms understood what was happening and increased their hunger. Consequently, Savathûn resolved to try another approach, in which her subordinate Hive would gather tribute in a region of space where time passed faster than the rest of the universe. She planned to use the power and insight attained through this method to completely overhaul the way in which she gained tribute through the Sword Logic, going from a system where tribute was obtained through violence to one where tribute was obtained through the failure of other beings to understand her schemes. This new system of acquiring tribute would be known as “Imbaru”. 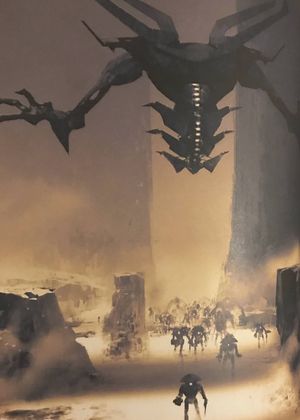 To achieve this, she purposely led Crota to let the Vex into his father’s Throne World, in order to compel the Vex to create Quria, Blade Transform. Later, when the campaign against the Harmony was complete and Quria was Taken and given to her as a gift, Savathûn left her siblings behind and entered the Harmony’s black hole, hoping to further her plans and prevent the Taken Vex Mind from reporting her work to Oryx.

While in the black hole, she taught Quria to harness Hive magic and apply it to computational problem-solving. Using this, Quria learned how to navigate and engineer the singularity, then format the information for Savathûn to understand. Now able to understand the singularity’s inner workings, she began moving forward with her grand scheme.

Savathûn explained the details of her plan to a confused Thrall, as per a rule of the High Coven that a Wizard’s schemes should be incomprehensible to a Thrall. She then recorded her conversation and encrypted it with the assistance of Quria, along with a message for a future reader. This message would remain unread for an untold span of time, until the Guardian stumbled upon it, encrypted within Glimmer, while exploring the Dreaming City.

Two years after the apparent death of Oryx in the Taken War, a previously unknown Hive brood infested the abandoned Golden Age arcologies on the moon of Titan, led by powerful Hive such as Naktal, Fury of Savathûn, Kudazad, Binder of Savathûn, and Vanbaluk, Trusted of Savathûn. Ghost scans of various Hive artifacts further linked the new brood to Savathûn. 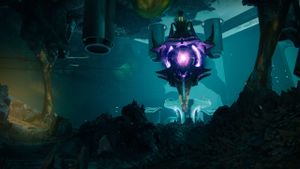 Most disturbing of all, a fireteam of Guardians was lost during an incursion into the New Pacific Arcology, Operation Caliban, and were discovered to have been converted by the Hive into crystals containing Void Light. These crystals were intended to feed a summoning ritual for her, the centerpiece of which was a massive Shrieker titled “Savathûn’s Song”. With the aid of the Praxic Warlock Taeko-3, the Guardian fought through the depths of the Arcology and destroyed the crystals and the Song, disrupting the summoning ritual.

Evidence from elsewhere in the solar system indicates that Savathûn has taken control of the remnants of the Taken through Quria; having learned the power to Take through its perfected simulations of Oryx. On Io, Taken forces led by Ir Arok, Tongue of Quria have attempted to corrupt the Vex collective at the Pyramidion, only to fail due to the Guardian’s intervention.

Furthermore, a Red Legion commander, Grask, the Consumed was encountered as a Taken; the Red Legion only had a presence in Sol after Oryx’s death, so this serves as further indication that Savathûn has achieved domination over the Taken.

Furthermore, after the awakening and fall of Nokris and the Worm God, Xol, Guardians found the Hive on Mars sending messages to Savathûn, pleading her to arise from the Deep and “claim their power”. Envoys of Savathûn have also been seen emerging from Ascendant portals in Hellas Basin.

That’s all for this entry, Guardians. Next time will see us dive into Savathun’s actions in the Dreaming City. Stay tuned.