The Story Of Savathun, Part 1: Pact Of The Deep

With the Witch Queen on the horizon, I thought it best to refresh Guardians’ memory a little. Today, and over the course of several other articles, we’ll be going over everything we know about Savathun, from her origins as Sathona of Fundament to the Witch Queen we know today. Let’s begin with Part 1: Pact Of The Deep.

Savathûn was born Sathona, on the planet Fundament. She was one of a short-lived species whose homeworld had crashed into Fundament millions of years earlier, with the shards of the planet forming Fundament’s continents. The Osmium Court was one such continent, ruled by the Osmium King, and Sathona was his second-born daughter, older sister to Xi Ro and younger sister to Aurash.

The three sisters were tutored by Taox, a sterile Mother, the proto-Hive morph capable of spawning children, which also allowed them to live longer by eating “Mother-jelly” at adulthood. The proto-Hive’s harsh lives convinced Sathona at an early age to become a Mother, not because she wanted children or feared dying, but because she wanted to live long enough to have meaning in her life.

However, by the time her father turned ten Fundament years (a lifetime by the standards of their species), he had discovered a dead Worm on the shores of the Osmium Court, which he started tending to it as a familiar, and began raving that the Syzygy, a prophesied disaster, would soon occur.

While Aurash took her father’s warnings to heart, Taox concluded that the King was falling to senility in his old age, and that none of his daughters, which were two years old at the time, could properly rule the Osmium Court and protect it from the Helium Court, a rival kingdom. While acknowledging that Sathona was a brilliant thinker, Taox noted that she could not fight. In desperation, Taox sent a message to the rulers of the Helium Court, the Helium Drinkers, saying that she would help them assassinate the King and his daughters if they installed her as their regent.

The Helium Drinkers accepted Taox’s proposal and attacked, killing the King but failing to kill his daughters. In the confusion, Sathona managed to steal her father’s Worm in their escape. Reaching Aurash’s ship, the three sisters made a blood oath to return and take vengeance, with Sathona vowing that she would become a Mother and raise her spawn on the corpses of the Helium Drinkers.

Over the next year, the three sisters sailed the oceans of Fundament. During this time, Sathona began to hear her father’s worm speak to her, guiding her to acts that would save the sisters over the year. Finally, the three sisters found a ship they named “the needle”, built of high technology, but whose crew had died obscenely after hatching an egg from a creature that they could not recognize.

Xi Ro insisted that they sell the ship at the Kaharn Atoll, where the species of Fundament gathered, saying that an auction could raise them enough money to hire mercenaries to fight the Helium Drinkers. However, Sathona told Xi Ro that the ship was worthless. Aurash instead suggested that they repair the ship. With prompting from the Worm, Sathona agreed with Aurash and convinced Xi Ro to repair the ship.

Over the next two years, the sisters repaired the needle, but by this point, the sisters were five years old. Sathona raised her fears that she would soon be too old to eat mother-jelly, and that the sisters would be unable to fulfill their oath. Aurash said that the sisters had to dive beneath the oceans of Fundament, traveling to the planet’s core.

Xi Ro warned that this was how the crew had died, but Sathona, urged on by the Worm, agreed with Aurash. The sisters took the needle into the deep. They finally reached a point where they could use the ship’s sensors on the oceans. To their horror, they discovered that the Syzygy was real, and that Fundament’s moons had already aligned.

Just then, they were encountered by the Leviathan, a creature long spoken of in proto-Hive myth. The Leviathan warned the sisters that they needed to turn back, or else would unleash disaster upon the universe, saying that they faced a choice between the Light, which offered civilization, and the Darkness, which offered only violence. However, the Leviathan offered no hope to the sisters to avoid the Syzygy. Sathona then revealed the Worm’s help to her sisters, and how it urged them to go down. Rejecting the Leviathan’s entreaties, the sisters dove into the core.

Reaching the very centre of Fundament, the three sisters found the Worm Gods: Akka, the Worm of Secrets, Eir, the Keeper of Order, Ur, the Ever-Hunger, Xol, Will of the Thousands, and Yul, the Honest Worm. The Worm Gods offered the three sisters a chance for the proto-Hive to escape Fundament as well as achieve immortality. All they had to do was take the Worms larvae into them as symbiotes and spread them among the proto-Hive. 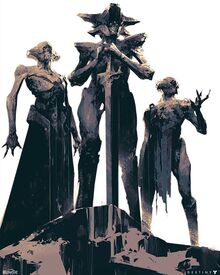 As Auryx and his sisters forced an ultimatum on the remaining proto-Hive to accept the worms or perish, Auryx turned his attention to Fundament’s moons, and the Ammonites there who had allied with the Traveler and gave asylum to Taox. Initially he was willing to negotiate with the Ammonites, but his sister Savathûn, under pressure from the Worms, killed Auryx as punishment. Rather than dying, Auryx’s soul instead passed to his Ascendant realm, or throne world, where his soul resided until he returned to the mortal realm.

Rebuked, Auryx purged what sympathy and goodwill he had left, becoming a merciless tyrant. He and his sisters warred with and killed one another on a regular basis after the defeat of the Ammonites, as part of their worship of the Sword-Logic and their attempt to become the sharpest blades in the universe, heading to their Ascendant realms when defeated. Their war of revenge against Taox had transformed into a campaign of genocide, when they slew the Ammonites and other interstellar civilizations to feed their worms. When Oryx established the Court of Oryx to study the sword logic, Savathûn was inspired to establish a court of her own, known as the High Coven.

During the war with the Ecumene, Auryx came to realize that the Worm Gods had deceived him and his sisters: their worms appetites were growing past their ability to feed with death. Meeting with his sisters in his ascendant realm, surrounded by their servants (some of which despised them for showing weakness) they despaired over their dilemma. When his sisters offered their power to help Auryx find a way to save them, Auryx killed them, then used that power to confront his patron god Akka, the Worm of Secrets. He killed Akka so that he could steal its ability to call upon the Deep and created the Tablets of Ruin, which gave him the power to Take. 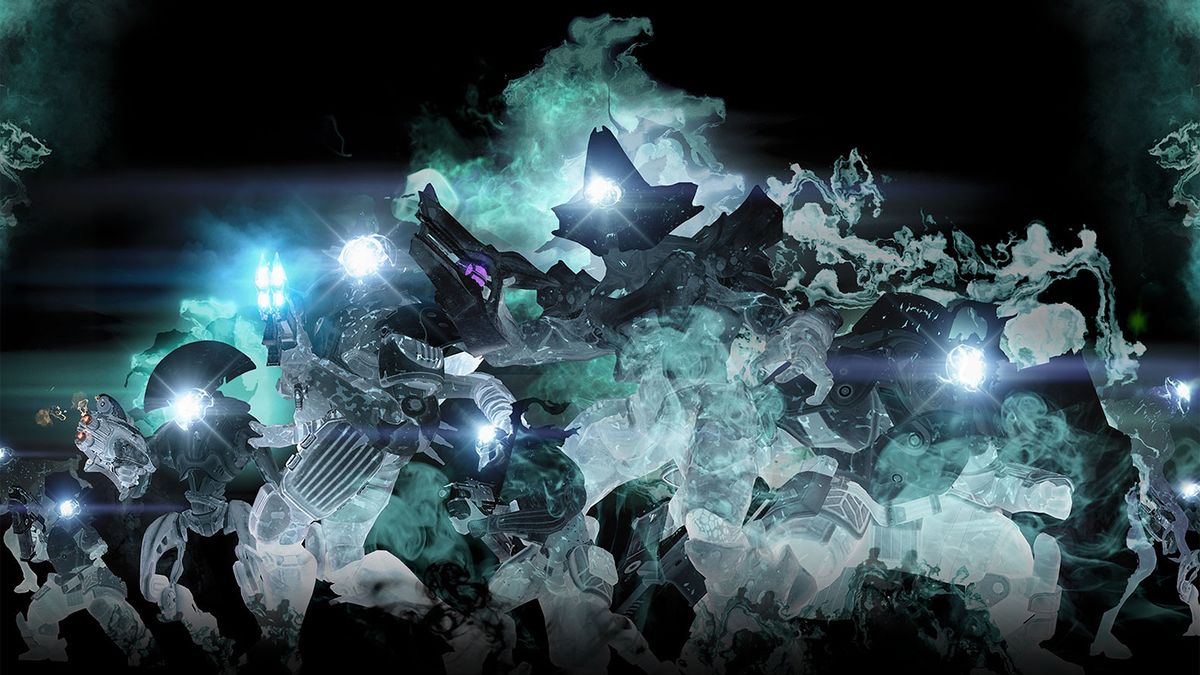 His transformation complete, Auryx was now Oryx, the Taken King. During the subsequent war with the Ecumene, Oryx revived Xivu Arath in an act of war, and revived Savathûn in an act of cunning. He then decreed the tithe system: each Hive would kill their enemies, take some to feed their own worm, and tithe the rest to their superior. Thralls would tithe to Acolytes, Acolytes would tithe to Knights or Wizards, the Knights and Wizards would tithe to the Ascendant Hive, those who commanded legions of warriors and earned the right to enter the Hive gods’ Ascendant realms.

All of this violence would eventually reach Oryx, Savathûn, and Xivu Arath, allowing their worms to feed on violence while continuing to invoke their inner natures.

Following the Golden Amputation, Oryx declared to his sisters that the Hive had conquered its way to the edge of the Deep, and that it had granted him a personal audience. As Oryx retreated into his throne world to commune with it, Savathûn conspired with Xivu Arath to strand him there and steal his Tablets of Ruin by cutting off the tribute flowing through his tithe system. They were ultimately unsuccessful, and on returning, Oryx waged war on Savathûn and crippled her own tribute.

In the aftermath of this attempted betrayal, Savathûn learned of one of Oryx’s daughters, Ir Anûk, and was both enraged and delighted by her brilliance.

While Oryx was off studying the Deep, his son Crota was deceived by Savathûn into using his Cleaver to cut a portal inside his throne world, allowing the Vex to invade it. This amused Savathûn. Her daughter alerted Eir to the situation, who alerted Oryx in turn. After Oryx dealt with the incursion, Savathûn told Xivu Arath that Oryx’s throne had been compromised and showed her where to cut into it so she could kill him.

However, Oryx had recognized that his throne world was vulnerable, so he moved it into a mighty Dreadnaught scrimshawed from the remains of Akka, stealing from Savathûn her Scalpel to make it.

After Oryx confronted and captured Quria for the last time, he presented the Vex to Savathûn as a gift, hoping she would be pleased by its simulations. When she asked him what proof they had that what they were doing was right, Oryx simply replied that the Hive’s existence was proof enough in their convictions to live eternal by the Sword-Logic.

Following the war with the Harmony, Savathûn decided that her fleets would enter the black hole that the Harmony lived around, claiming that they would become stronger for it, while Xivu Arath took her fleets away from Oryx’s as she felt he constrained her too much.

That’s all for this first entry, Guardians. Next time will see us dive into Savathun in the more modern world of Destiny, so stay tuned for that entry.

Have you Noticed the Broken Pyramid in Savathun’s Throne World in Destiny 2 The Witch Queen?
Destiny’s 7th Anniversary Post Is Truly A Window To The Past